The invasion’s  event chair Donna Earl and her executive is working on the details of this year’s celebration of 25 years.  Three hundred scarecrows will on display beginning in early September. We have been told to think silver.

The date and time for this year’s parade is Friday, September 30, starting with pre-parade ceremonies and entertainment at 5 p.m., then the parade at 6 p.m. on Sykes Street, followed by a family festival at the Rotary Harbour Pavilion… free activities for the whole family, apple pie contest awards and auction, entertainment, and more.

The invasion of the scarecrows begins in mid-September and runs till the end of the Thanksgiving weekend. More than 300 scarecrows will be found in the downtown area of Meaford,  and in Bognor, Annan, and Leith – dangling  from downtown lamp posts, hiding in bushes and trees, lounging happily on benches, peeking out from behind cornstalks and resting comfortably on porches and verandas. They frolic everywhere! Sykes Street and the harbour area are particularly alive with scarecrows during this time. This year’s decorating theme is Scarecrows Celebrate 25 Years.

Come early and check out our Business Competition Winners (though we see all participants as winners!). See the displays in store windows and at Agribusinesses all around Meaford. They are different every year.

Come early and claim a spot close to Nelson and Sykes Street where the amazing and ever-so-engaging Tyler Boyle will literally have you dancing in the streets.

Be on the main street as this popular parade winds its way down Sykes Street, past The Big Apple, to our beautiful harbour. This parade has SO many scarecrows in SO many costumes doing SO many things. It is like no other.

Families love this ever popular event. There are activities and surprises and fun for all ages. And it’s FREE! Come see for yourself. Refreshments are available for purchase by local service clubs to support community projects.  The winning apple pies from the apple pie contest will be auctioned and pies sold by the slice. Local entertainers will provide great music.

Don’t forget to visit the Meaford Farmer’s Market that evening at the family festival with more than a dozen local vendors selling high quality produce and meat, as well as arts and crafts and scrumptious baked goods. 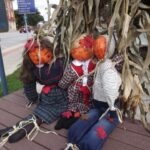 Waiting for the parade! 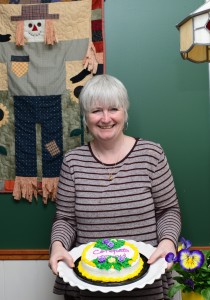