Meaford BIA proud supporter of award-winning invasion from Year One

Meaford BIA proud supporter of award-winning invasion from Year One 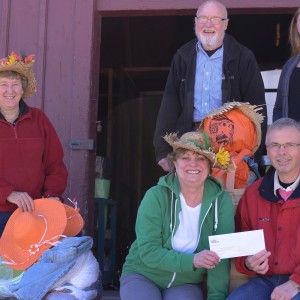 The Meaford Business Improvement Area (BIA) board and members have been there to support the invasion from Year One, according to BIA Chair Dave Glass. “When one of our members, George Potopnyk first suggested the idea of decorating the downtown area with scarecrows during the Apple Harvest Craft Show weekend, individual businesses set to building and displaying their scarecrow creations,” he says. A few years passed, public interest in the scarecrow displays grew, and when the task became too time-consuming, George solicited the help of community volunteers. The BIA continued to support the event and have supported it whole-heartedly every year since.

“The Meaford BIA is proud of what the Scarecrow Invasion and Family Festival has become.” Bronwen Perry, like many Meaford young people, has grown up with the scarecrow invasion. She remembers the variety of scarecrows that her mother, Kelly Armstrong, and Kelly’s business partner Kathy Hunter displayed annually in their storefront window, in the former Over the Rainbow novelty shop on Sykes Street. “I remember scarecrows on front lawns and in the downtown, and I remember the parades,” she says. “I was in many of those parades and I helped build many scarecrows. And now scarecrows are everywhere- they have invaded the town.” Perry is now a successful sales rep with Royal Lepage Locations North in Meaford and an invasion and festival supporter through her involvement with the BIA.

The Meaford BIA is one of 14 official sponsors of the annual event. Other sponsors include Rogers TV, Meaford Dairy Queen, Meaford Chamber of Commerce, Metroland Media/Meaford Express, Bayshore Broadcasting, Jeff Elford Insurance and Financial Services and The Cooperators, Jim and Isabel Almond, The Meaford Independent, Rotary Club of Meaford, My Favourite Marketer, Grandma Lambe’s, and the Municipality of Meaford, along with support from the Community Foundation of Grey Bruce and Culture Days.

Plans are already underway for this year’s event in this the 20th anniversary of the Scarecrow Invasion and Family Festival. The decorating committee is designing this year’s line-up of scarecrows to start rolling them out early September, in keeping with this year’s theme, Celebrating 20 Years with Music, and in time for the big 20th birthday celebrations on Friday, Sept. 30th.